Facebook has made a number of changes to its services and features over the past week which, according to specialist blog All Facebook, will mainly have an impact on the way Places and location-based updating will work and also how users share content with one another. 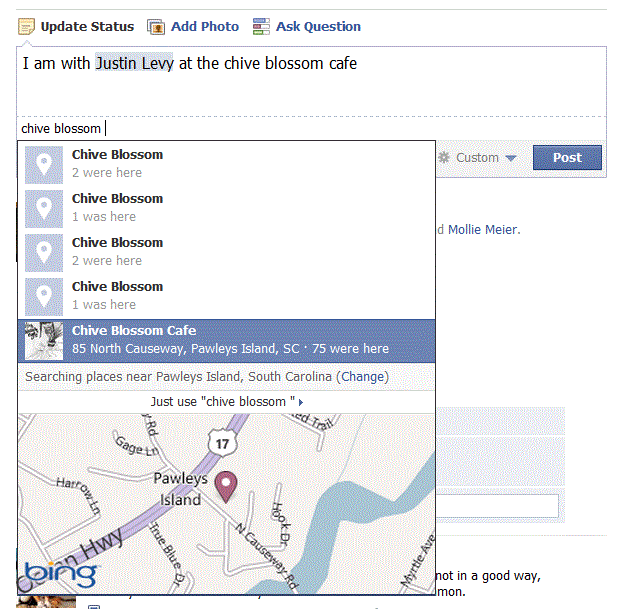 Over the past week, many different online blogs and publications have been talking about Facebook Places shutting down.

However, the Places service is not being shut down completely, it is just being changed to make it more efficient and useful for both businesses and users alike.

Users will soon no longer need to “check-in” to a place that they visit. Instead they just tag a place in their normal updates, like in the example above, whether they’ve been or they’re going to that location.

Instead of using his mobile to check-in to a place, the user above has just written an update mentioning the location too. This will have a number of benefits, notably that it will make adding location information much more natural for users.

As Facebook Places is linked to Facebook Pages, the social network has decided to make a few changes to the way Pages are set up.

The main issue is that many businesses have different stores, arms and franchises. For instance, Starbucks is a brand, but there is Starbucks Oxford Street, Starbucks Notting Hill, Starbucks Westfield, the list could go on and on.

In order to come up with a way for pages to be arranged when there are lots of separate parts of a business, Facebook has devised parent and child pages. So Starbucks would be the parent page and Starbucks Oxford Street, Starbucks Notting Hill, etc would all be child pages.

This is an important update for businesses but isn’t live just yet. It is a change that will be made over the next few months and Facebook will guide you every step of the way.

This last change will mainly affect individual users, but it’s important for businesses to keep up to date with all kinds of changes.

The main difference which is gradually being rolled out across the network, is that users will be able to control which specific pieces of information are visible to certain groups of people.

Anyone who has used Google Plus before will know that after you’ve written anything, the network will ask which Circles you want to share it with. Facebook is gearing up to act in much the same way as that, as a drop down menu will appear every time you try to post something and ask who you want to be able to see it.

Another change that’s being introduced, is that users don’t have to like a brand or business to tag it in a post or photo, which means that people can interact with your brand and upload content about you even if they’ve never gotten round to pressing like!

Here at Codastar we know all about Facebook, from the latest news through to how to create a branded intro page. To talk to us about everything Facebook, get in touch with one of the team today.